As we wave good-bye to those heading for the airport, another chapter of the YES NZ Adventures has drawn to a close. As always it has gone by way to quickly. It’s hard to believe that it was only 16 days ago that the coaches gathered together in Queenstown. This year crew included seasoned veterans Barry and Rich, along with 5 timer Meesh, sophomore Linc and rookie Erin.

The first week started with much promise. The snow was sparse in the Home Basin but was in great condition in the Saddle. The Mototapu chutes were open and the skiing was great. The clients started to arrive and so did the weather. A storm brought in some fresh snow but with it came lo-visibility. In some cases the light was so flat it sent skiers into the lodge with feelings of vertigo. It was a full group that braved the challenging Treble Cone conditions but we were rewarded with great skiing. Relishes was the spot for Tuesday night dinner and the group was once again in fine form. The weather cleared for the latter part of the week as the groups played in the Saddle Basin and explored the Powder Bowl Chutes. As hard as he tried, one nameless group couldn’t seem to find Saddleback. The bus ride up was without incident expect for the one pair of skis that were forgotten one morning. Heidi and Helga summed up the week in song and good-byes were said to those leaving us after week 1.

Saturday saw some new arrivals to join the 2 weekers. The second week started much the same as week 1 with some fresh snow and Chris having to put chains on the bus. For the rest of the week however, blue skies and sunshine was the order of the day. Despite the smaller groups, Meesh still managed to “misplace” his students on a daily basis, while other groups managed to break poles and fly through fences. With a flu bug going around, class sizes fluctuated (and the bus grew roomier) while people tried to recover. The bus rides were a little calmer than the first week (Angela?), but we did have a whole herd of cattle on road one morning. The week wrapped up with a tour veteran threatening to chain herself to the bus.

Our home away from home.

Once again the Edgewater were fantastic hosts, putting up with all our shenanigans. As we pack our bags, the rain is falling and the wind is howling. A good day not to be on the hill. The remaining coaches head off to the airport tomorrow but not before one last rugby game between the All Blacks and Stralia. Sad to be leaving but look forward to many more YES adventures in the future. 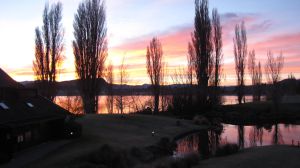 Sunrise over the Edgewater.

The day broke upon the final day here at Treble Cone. As always the trip has gone by far too quickly. Once again the sun was the star as the conditions were great. Saddle was the place to be as the groomers were in great shape early. The off-piste started to soften and offered up some great alternatives. Gunbarrels featured in the afternoon and had some sparse but great snow. As the day wrapped up, people started to realize that the dream was winding down for another year. Someone threatened to stay on the bus as they didn’t want to go home and were removed with the promise of a drink in the bar.

Skiing along the Saddle Basin. 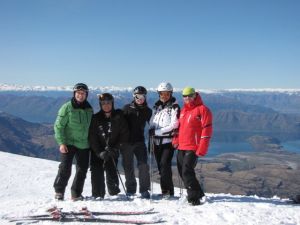 Erin’s group atop the Saddle. 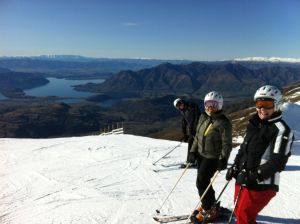 Meesh’s group, at least most of them.

Reports were written up and then it was off to the Edgewater for the wrap up function. Speeches were spoken, drinks drank and many a tear were shed as good-byes were shared. Some stayed in for dinner while others hit the town. Those leaving in the morning started to pack. The scales came out in the coaches quarters, as Rich and Linc tired to squeeze every last allowable kilo into their bags.

You could be the proud owner of hand signed Gary Wilson balls.

Another YES NZ adventure is drawing to a close. It seems like we just started this trip and now its time to go home. A big thanks to everyone who participated and we hope to see you all on the slopes again soon. 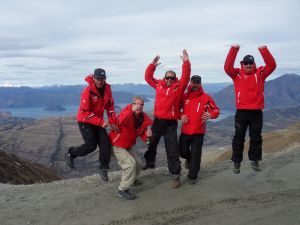 Oh what a feeling…..